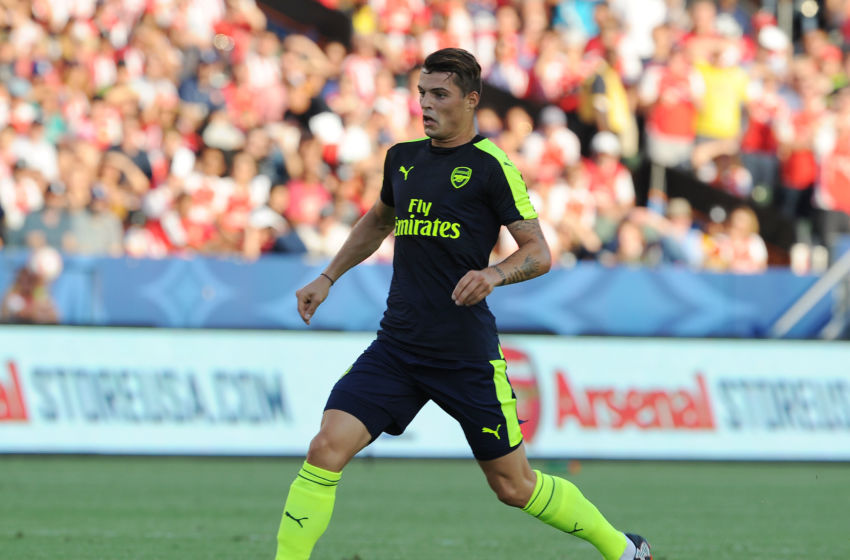 5 Reasons Why Arsenal Fans Should Be Excited About Granit Xhaka

Arsenal have signed an extraordinary talent in Granit Xhaka.

The 23-year-old has joined the club for £35m from Borussia Monchengladbach, and his performances for the German club in the Bundesliga have likened the Swiss to Bastian Schweinsteiger.

Similarly, Xhaka’s phenomenal perfomances for Switzerland have impressed fans far and wide, completing 12 tackles and eighty-nine percent of his passes at Euro 2016.

Here’s why Xhaka is going to be such an asset for Arsenal ahead of the new season.

The midfield maestro is quite simply born to lead. At the start of the 2015/16 Bundesliga campaign, Monchengladbach were rock bottom having lost five consecutive games and manager Lucien Favre, who had saved the club from relegation in his debut season, left the club. Andre Schubert was chosen to replace Favre in what is his first experience as a first-team coach.

It was a somewhat striking decision to choose a then 22-year-old in Xhaka as the new club captain, but he embraced the opportunity. It seems that responsibility and pressure only aids to Xhaka’s game, as he progressed as an influential and instrumental player, leading Die Fohlen to fourth come May in Germany.

Arsenal have been severely lacking in leaders in recent seasons, and with many of the club’s stars such aS Laurent Koscielny ageing, Xhaka’s presence could not be any more welcomed. A hugely positive addition off the pitch, as well as on it.

Xhaka’s tenacious nature has led to more cards of the yellow and red variety than the Swiss can recall, but it also largely benefits the way that he likes to play football. We saw this best during the 2014/15 season, when Gladbach had Christoph Kramer on loan. Kramer’s outstanding ability to be utilised as an anchor and protector in front of the defence allowed Xhaka to move further into the midfield and into the midst of the action.

Xhaka averaged 2.4 successful tackles per game last season, and made 2.7 interceptions. His usefulness comes into play when he is allowed to break up the play and instigate attacks further afield, with a liking to play clever through balls for the wide men and forwards. So Xhaka’s role is two-fold here, absorbing opposition attacks whilst also encouraging offensive football. 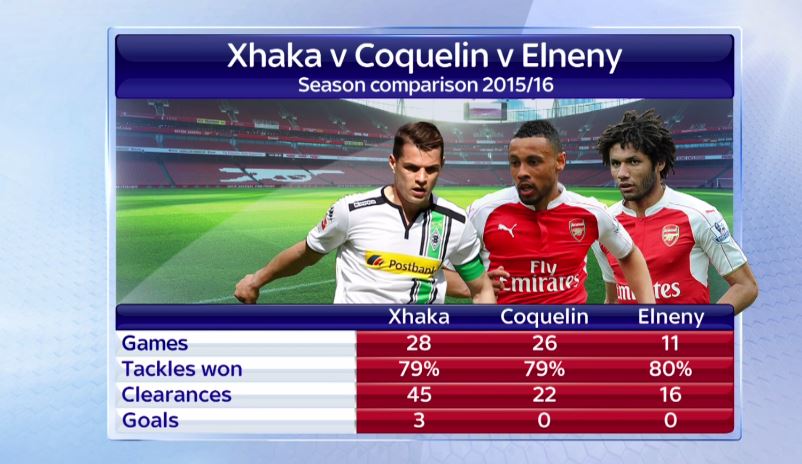 He may not be an exceptional penalty taker, but he has shown numerous times for Die Fohlen that he steps up to the plate when required, and has been one of the most consistent and clinical players in the Bundesliga for the last two seasons.

Arsenal have lost innumerable points because they have failed to kill games off and maintain a high level of pressure against the opposition, but signing Xhaka may transform that. In the dying embers of a derby encounter between Monchengladbach and Koln in 2015, guess who arrived who convert Thorgan Hazard’s free-kick in injury time..

Xhaka has that steely determination that Arsene Wenger had been desperately searching for. Yes, his discipline needs work, but it is the bite, fire and passion within him that drives him to sometimes reckless extremes on the pitch. When he dons the shirt of his team, he will run himself beyond the point of pain to enable victory.

At the end of the 2014/15 season, he played the final nine games of the season with a broken rib. ‘At times, it hurt like hell’ he had said, but it was worth it to see Monchengladbach in the Champions League places.

To say Xhaka dictates the flow of the game does not fit his industrious style, but it goes someway to explaining his effect on the pitch. As aforementioned, Xhaka likes to drive the ball forward when possible, but his decision-making is reminiscent of a player with eagle-like precision in terms of his passing.

His eighty-five percent pass success last season suggests it’s a rare occasion when he does not find his target, whilst he was second to only Toni Kroos at the Euros in terms of forward passes.

If Xhaka can learn to conceal his volatile rage in times of frustration, he will go on to become one of the world’s best players. As it is, Arsenal have an extraordinary player on their hands.

Celebrating broadcast journalism in all its forms.

The home of longform football writing

The Blue on the Danube

The eclectic musings of a Manchester City fan, who has fallen in love with German football and a certain provincial Bavarian outfit that are based upon the famous Danube. Confused? So am I.

The latest news on WordPress.com and the WordPress community.

Talk of the Bundesliga

Where we talk about all things German football.

Articles on the wonderful world of Football

Peeking Behind the Numbers in Football

"Football is simple. But nothing is more difficult than playing simple football." Johan Cruyff

The writing blog of David Stringer

Defending With The Ball

“What enriches you is the game, not the result.The result is a piece of data. The birth rate goesup. Is that enriching? No. But the process that led to that? Now that’s enriching.”

Arsenal and European football in general

"Sometimes you laugh, sometimes you cry. That's the beauty of the sport."
Football and Politics

Bringing parts of my world to you, one keyboard session at a time.

All At Sea Fanzine